Explainer: Global astrology charts provide data that is used to forecast future events and conditions that are not inevitable.

As forecast models they do not permit precise prediction.

So global astrology is more like a spectator sport where you know what’s forecast and inclined to occur and then watch events as the game unfolds.

The top US news stories in 2017 involved Donald Trump, North Korea, the FBI, the Great American eclipse, hurricanes, the opioid epidemic and the ‘silence breakers’.

Specifically: Trump’s war of words with North Korea, the FBI’s investigation into Russian interference in the 2016 election campaign; the natural disasters that followed the total eclipse of the Sun on August 21; the 64,000 fatal drug overdoses in 2016; and the #MeToo social movement – ‘one of the highest velocity shifts in American culture since the 1960s’.

The map of America’s soul – its birth chart – has Uranus – planet of liberty, racism, experimental experiences, extremists and unexpected change – conjunction the ascendant (the people); and Mercury – the cusp ruler of house 1 (the people) – opposition Pluto – planet of division – in house 9.

And the country is tragically divided.

In 2016 63 million Americans – that’s 25% of the population – opted for change and elected an untried political novice as their President.

Trump is a Uranus president

House 10 rules and defines the type of president/leader a country attracts.

In America’s chart the Moon is in house 10 and Saturn and Uranus (Aquarius on the cusp) are the co-rulers.

And Donald Trump is an unqualified, unorthodox, extremist president who’s ruled by Uranus.

Uranus is in house 1 – the people – so Trump – the very extreme and unconventional president – is having a profound influence on the American people and their health, welfare and disposition.

In a radical moment Uranus discarded the tried and trusted, but if the replacement model proves unsatisfactory the restless malcontent – Uranus – can cause the tide of public opinion to swing back in favor of what was considered banal, stale and unsatisfactory.

In America’s chart house 12 – the FBI – is ruled by Mars (Aries on the cusp) and Venus (Taurus is intercepted).

The FBI’s investigation into political interference by Russia in the 2016 election commenced in July 2016 and has slowly gathered momentum to embroil Donald Trump and his associates.

Mars – the planet of strife and feuding – is in house 1 (the people) so the FBI is there to serve the people and Mars is very active by progression.

And progressed Venus – now in house 12 – indicates the involvement of a woman in the investigation as events unfold.

When Donald Trump was elected President a wave of anger, disgust and resentment (Mars) swept the nation.

In one instance it was mobilized into action and in the second half of 2017 a recording of the new president made in 2005 was instrumental in propelling the #MeToo social movement into a cultural phenomenon.

In 2017 the actions of silence breakers ‘unleashed one of the highest-velocity shifts in American culture since the 1960s.’

And you might be right in thinking that women are on the march and out to get Donald Trump. The outrage triggered by his vulgar 2005 tape that surfaced in October 2016 won’t go away.

By year’s end over 100 power brokers had resigned and we have no doubt that many movers and shakers are shaking in their boots.

It’s essentially a house 5 (sex and sexual misconduct) and women’s issue (Venus) and in America’s chart progressed Saturn in house 6 (the ruler of house 5) was trine birth chart Venus in house 2.

This aspect has many years to run and major developments are set to occur. 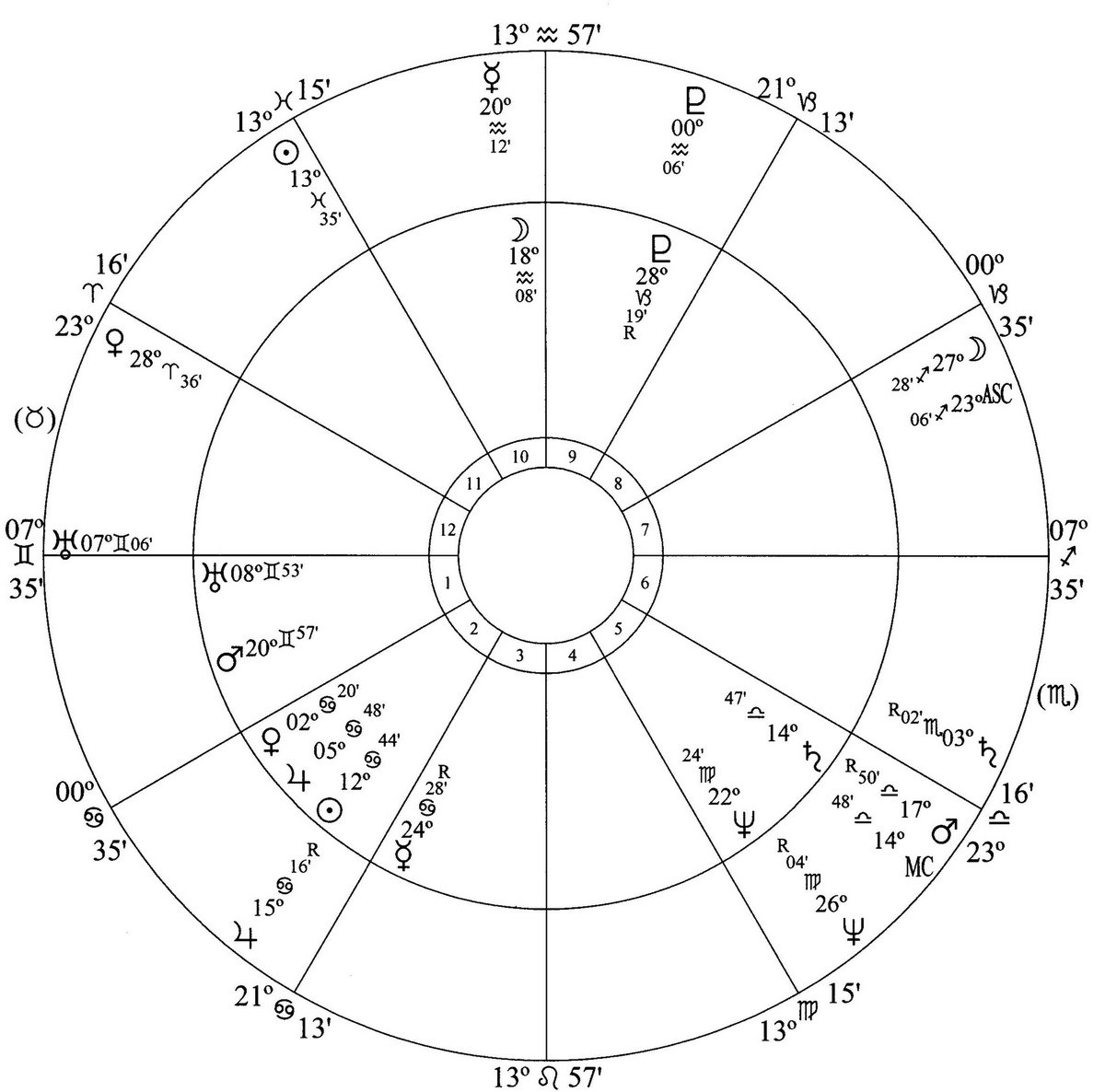 In September 2017 progressed Sun in house 10 (Donald Trump and his administration) moved to form a semisquare (friction) aspect with birth chart Pluto in house 9 (the Constitution and Supreme Court).

In October 2017 progressed Venus in house 12 (secrets and silence) moved to form an obstacle (square) aspect with birth chart Pluto in house 9 (the courts, internet, television, radio and social media).

Venus is the planet of women and women’s issues.

Pluto is the planet of groups, gang methods, harassment and intimidation.

The aspect forecasts a court case involving a group of women; drastic action by women’s groups; disunity within women’s groups; groups ganging up against women; court decisions adversely affecting women’s rights; a legal system that fails victims of sexual harassment; dictatorial methods and an acute crisis for the courts.

The Midheaven is the marker for honor, business and publicity.

Saturn is the planet of work, responsibility, economy and loss.

Several scenarios are in play: a business slow-down; a slump on Wall Street; adversity for the President; and/or reputational damage for America.

The aspect reaches peak power in December 2018 and could play a significant role in November’s midterm election.

Saturn in some respects rules the Democrats. Its constituents include the workers and those on the bottom rung of the financial ladder.

Its more progressive social policies bear the mark of Uranus.

Jupiter and Saturn are the business planets and in November 2006 progressed Jupiter in house 2 (finances) moved to form an obstacle (square) aspect with birth chart Saturn in house 5 (speculation, entertainment and children).

Jupiter is the planet of growth and expansion and Saturn is the planet of economy and austerity; and their long running square aspect forecasts periods of financial liberalism and fiscal conservatism.

Whatever, it’s having an adverse influence on America’s financial fortunes.

The aspect never peaks and will hang around to 2045.

This unique set up involving the business planets and the marker for business activity forecasts financial problems and a difficult time for business.

Trump is a businessman and his administration has introduced polices and reforms that favor big business with the expectation that some of the benefits (job creation and higher wages) will trickle down to benefit the middle class and workers.

Mars is the planet of manufacturing and the manufacturing sector is experiencing radical – Aquarian Age – technological change with the introduction of robots possessing artificial intelligence.

The people are discontent and angry

Uranus is not a harmonious planet.

He does see the need for reform and technological innovation but, socially, his extremism and intolerance towards those who are different are highly destructive.

And Mars is definitely not a harmonious planet.

That said…high levels of discontentment and anger will be evident throughout 2018.

In America’s chart house 11 – Congress – is ruled by Jupiter and Neptune (Pisces on the cusp).

And the chaos, poor judgments, obstacles and agitation these aspects mapped were evident as Congress blundered through 2017.

A significant change occurs to house 11 in August 2018 when progressed Sun – planet of politics, political leaders and power brokers – moves there.

And progressed Sun is semisquare birth chart Pluto in house 9 (the Constitution).

Pluto and the Constitution

In America’s chart house 9 – the Constitution, Supreme Court, new laws, courts and court cases – is ruled by Pluto and Saturn (Capricorn on the cusp) and in 2018 it’s high in discord.

With Pluto you enter the insidious world of gang methods, coercion, harassment, corruption, shady-deals, duplicity, criminal, activity and dishonesty and Pluto is very active in 2018.

The house 9 discord can forecast a Constitutional crisis involving the Supreme Court.

Major progressed Moon is semisquare progressed Saturn on April 2, 2018 and major events pertaining the Constitution and Supreme Court can occur from March 4 to May 1, 2018.

In 2017 with progressed ascendant (the people) in house 7 square birth chart Neptune (opioids) in house 5 the opioid epidemic in America became a national emergency.

The aspect ends in May 2019 so the crisis will claim many more young lives before then.

Progressed Moon is conjunction progressed ascendant in August 2018 and square birth chart Neptune on August 7, 2018 and major events and developments pertaining to the opioid epidemic can occur in July and August 2018.

This political contest will receive non-stop media coverage throughout 2018.

Will the Republicans maintain their control over both houses or will the American voters give Donald Trump the thumbs down and elect Democrat majorities?

This chart can’t answer that question but progressed Sun in house 11 (Congress) semisquare birth chart Pluto – the planet of groups and drastic situations – does seem to forecast a high-stake political contest involving two powerful political groups – the Republicans and  Democrats.

And with Pluto in house 9 the result could end up being decided by the courts.

Pluto stands for everything that is vile, corrupt and despicable and the fake-news websites (house 9) will be working overtime dishing up the dirt. Russian interference can be expected.

Whatever, in the Sun section of the Aquarian age politics is a brutal, no holds barred blood sport. And that’s what the 2018 US midterm elections will be.

The data for this chart comes from Dr James D Keifer.

In 1908 he quoted ‘an acquaintance who was a descendant of a signer of the Declaration of Independence’.

The chart has 7 Gemini 35 on the ascendant and is known as the Gemini Rising chart.