Day 12: In his impeachment trial the Senate acquits Donald Trump 52-48 on charges of abuse of power and 53-47 on obstruction of Congress.

The senate numbers tell the story, but the astrodyne report for America’s Saturn-Pluto conjunction – a key global chart influencing the impeachment trial – details a set of numbers that reveal just how toxic the political landscape is in America as the country moves on towards November 3 and the 2020 presidential election.

Saturn was conjunction Pluto on January 12, 2020 at 11.59am EST and house 10 in the chart – Donald Trump and his administration – has almost 50% of the chart’s power and a massive 113.59 discordynes. See astrodynes in global astrology here

Day 11: Senators have their say at Trump’s impeachment trial. Top Republicans urged their fellow senators to acquit the President on both impeachment charges warning that the fate of the country depended it, while Democrat senators called Trump a threat to democracy. Senators from each party were singing from their respective song books.

Day 10: In their closing arguments prosecuting Democrats make a forceful appeal for conviction calling Trump a man with no moral compass who must be removed from office to protect American democracy.  Trump personal lawyer Jay Sekulow said neither charge brought against Trump was an impeachable offence and that the answer is elections, not impeachment.

Day 9: The US Senate by a vote of 51-49 votes against calling witnesses and collecting new evidence in Trump’s impeachment trial.

Day 8: US senators spend a second day firing questions at Democrat impeachment managers and Trump defence lawyers but for most observers the calling of witnesses – particularly John Bolton – was the key issue.

On Friday, January 31, 2020, when crucial votes will be taken transit Sun in the impeachment trial chart at 11 Aquarius 32 (6.00pm) will be conjunction birth chart Midheaven.

Day 7: The focus of the trail shifts to back-and-forth questioning as Republicans try to manage the fallout of John Bolton’s upcoming book.

Day 5: Trump’s lawyers present seven hours of arguments but there was a huge distraction in the senate chamber courtroom.

The New York Times (Mercury) had reported that John Bolton’s unpublished book manuscript includes disclosures that go to the heart of the abuse of power charge against Trump.

In the Saturn-Pluto conjunction chart Mercury is conjunction Saturn and Pluto; and Uranus in house 10 (Donald Trump) of America’s Pisces new Moon chart is square the lunation. Uranus is the planet of surprise events and disruptive actors.

Bolton’s book ‘The Room Where it Happened: A White House Memoir’ is scheduled to be published (Jupiter) March 17, 2020; and on March 20, 2020 Mars conjunction Jupiter in the sky is at peak power. In America’s Mars-Jupiter conjunction chart the conjunction is in house 10 (Donald Trump).

Mars in the sky was last conjunction Jupiter on January 7, 2018 and on January 9 Michael Wolff’s book ‘Fire and Fury’ – an exposé on Donald Trump and life at the White House – was published (Jupiter). And that had Trump furiously tweeting up a storm.

Day 4: Trump’s lawyers begin his defense by claiming that ‘The President did absolutely nothing wrong’ and accusing the Democrats of seeking to overturn the result of the 2016 election.

Since he took office Trump’s approval rating has languished in the low 40’s but it has recently received a boost due to America’s very good economy but whether the buoyant economic activity (house 2) low unemployment (house 6) and jobs growth (house 10) has anything to do with Trump’s policies is a debatable point.

Day 3: Democratic congressmen after presenting meticulous evidence to the US senate and the American people wrap up their case for the removal of the president for abuse of power and obstruction of justice.

Over the same period there has been a decrease in the number that doesn’t support impeachment from 51% to 45.3%. (Source FiveThirtyEight)

The Aquarius new-Moon occurred at 4.41.55pm EST Washington. It will have some influence over the impeachment trial. See the chart here

Day 2: The Democrats (Gemini ascendant and Mercury) commence to present their arguments for the removal of Donald Trump. Lead manager Adam Schiff lays out a detailed case (Mercury) focusing on Trump’s conduct towards Ukraine. Jerry Nadler, a senior Democrat, argued that Trump’s abuse of power ‘threatens the entire system’. Senators did there best to stay awake. Oral arguments will be presented over 3 days.

Ursa Minor – the first decanate of Gemini – is on the ascendant. It perceives and presents all parts of a problem in proper relation to the whole, but can get carried away trying to undertake too many things.

Mercury is in Equuleus – the first decanate of Aquarius. It has a full knowledge of human nature, knows how to handle people and is very progressive.

Mars in house 7 (Trump’s defense team) is opposition (separation) ascendant. It indicates a no-holds-barred tug-of-war between the opposing sides.

Mercury conjunction Midheaven (publicity the trial gets and how it is perceived by the public) conciliates the ascendant-Mars opposition. It can appease the conflict and provide the discordant ascendant-Mars energy with a harmonious channel of release.

Day 1: Democrat and Republican senators clashed (Mars) over impeachment rules and whether to call witnesses. Acrimony (Mars) was the dominant feeling (Moon). (Mars is parallel Moon in the electional chart). As arguments became harsh, heated and personal John Roberts, the presiding judge (Jupiter), reminded the protagonists (Mars) who they were and where they were but his stern warning regarding ‘civil behavior’ is likely to fall on deaf ears. Mars is just warming up. Fairness and evenhandedness (Libra) got a mention but there are no planets in Libra in the impeachment trial electional chart. Fairness is just a biased personal perception in the mind of each senator. 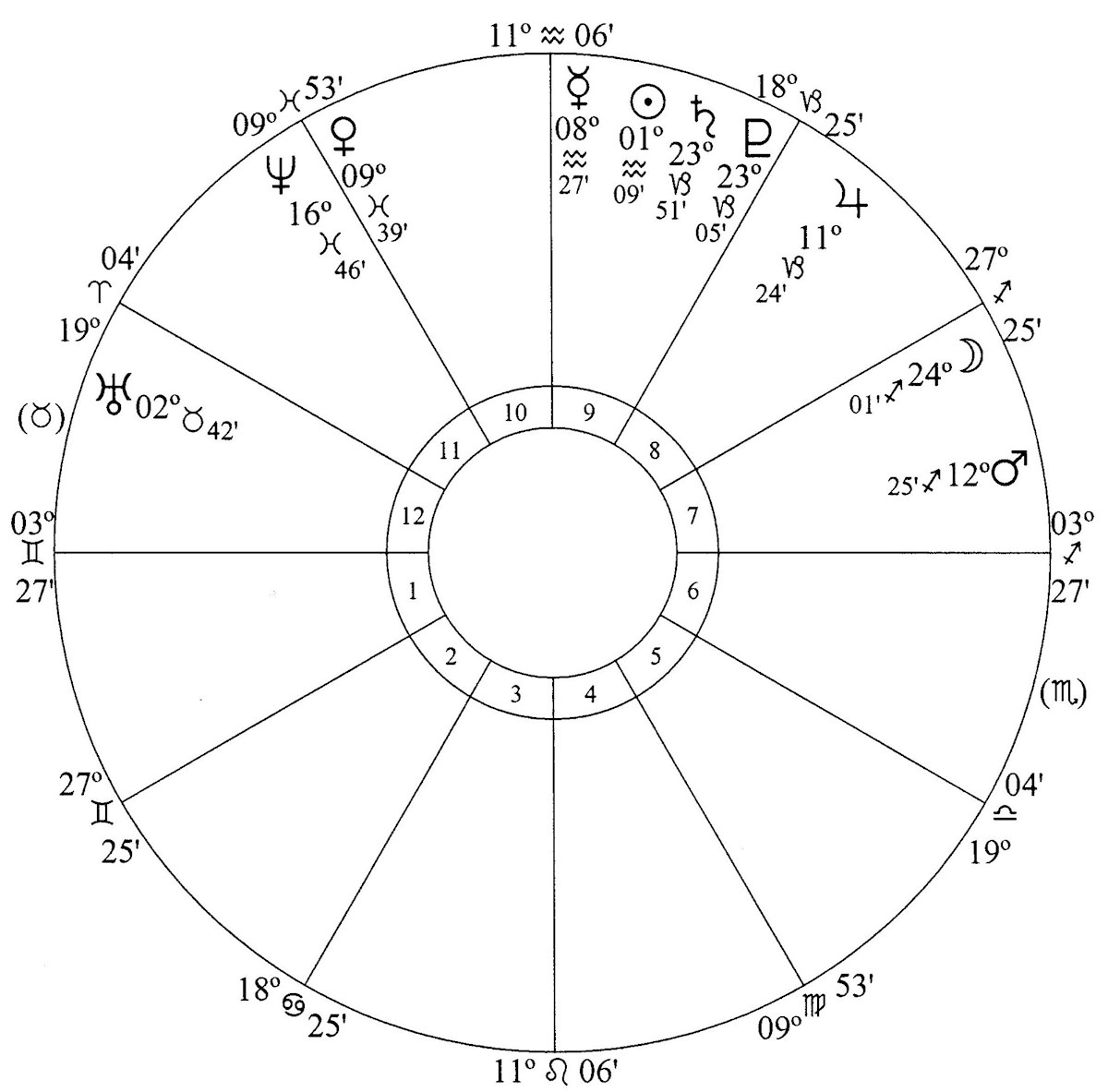 Donald Trump’s impeachment trial is not a conventional trial.

A trial is usually held in a court room (house 9) with a judge and jury; but in an impeachment trial the senate chamber (house 11) becomes the court of impeachment and the senators become the jury who pass judgement.

So it seems that in this rare event that house 11 in a mundane chart (including America’s chart) takes on the house 9 environmental setting.

But in the electional chart for Trump’s impeachment – calculated for the time the trial starts at the place it is held – it seems that the house 11 environmental setting – the Senate – gets moved to house 9 because that’s where the action is.

Sun (planet of politicians), Mercury (talk and controversy), Saturn (conservative thinking and fear) and Pluto (coercion, corruption and disunity) are all in house 9 (the trial, jury and verdict).

Donald Trump is the defendant or accused (house 7).

His defence team (house 7) will defend him against the impeachment charges – abuse of power and obstruction of Congress.

His prosecutors (house 1)are a group of seven Democrats who act as impeachment managers.

Supreme Court Chief Justice John Roberts (house 9) is there to see that the trial sticks to the predetermined rules.

The verdict (house 9) is handed down by the jury of senators.

Moon (notoriety and feelings) and Mars (strife and disputation) are in house 7 (Trump and his defence team).  Moon and Mars are parallel Pluto in house 9.

Jupiter – cusp ruler of house 7 – is in house 8 (the defendant’s finances) so Trump’s defence team (house 7) is costing him mega bucks.

Talkative and intellectually clever Mercury – cusp ruler of house 1 (the prosecutors) – is in house 9 (the trial). It’s conjunction Sun and Midheaven (publicity).

House 9 (the trial) and house 7 (Donald Trump) are the dominant houses and they’re both high in discord – 35 and 17 discordynes respectively.

Significant events pertaining to the trial are inclined to occur as Sun and Mercury form transit progressed aspects to the other planets in the chart.