This global events report correlates major international events and developments with their markers in specified astrological charts or the sky. Events as reported by reputable news services.

October 31: Eight people (ascendant) are killed (Mars) and at least 11 others injured when a man in a rented pick-up truck drives through a bike path along West Side Highway in Lower Manhattan, New York. Police (Mars) are treating the incident as a terror attack (Mars). Transit progressed Mars in house 8 (death) of the US Mars cycle chart was trine the ascendant (the people).

October 30: Federal investigators (Pluto) probing Russian interference in the 2016 US election charge Donald Trump’s former campaign manager Paul Manafort and another aide, Rick Gates, with conspiracy against the US, money laundering and failing to register as foreign agents (Pluto). A third former Trump adviser, George Papadopoulo, pleaded guilty in early October to lying to the FBI. Pluto was parallel Saturn in the Pluto cycle; and the Sun was opposition Mars in the Sun cycle.

With arrests imminent in the alleged Russian meddling in the 2016 US presidential election Donald Trump (Sun) fires of a tirade of tweets (Mars). Sun was parallel Mars in the Sun cycle.

Explosions and fire (Mars) at a fireworks (Mars) factory in Indonesia kill at least 47 people – many of them women (Venus) – and injure dozens. Mars was parallel Venus and Mars in the Mars cycle.

October 20: Suicide bombers (Mars) in Afghanistan attack a Shiite mosque in Kabul and a Sunni mosque in western Ghor province, killing at least 72 people. Mars was inconjunct Moon in the Mars cycle.

October 19: The men and women (Moon) of Mogadishu take to the streets wearing red (Mars) bandanas to show unity and solidarity for the hundreds of people killed and injured in Saturday's massive truck bombing (Mars). Mars was inconjunct Moon in the Mars cycle.

Jacinda Ardern is the new prime minister of New Zealand.

October 17: The Islamic State group loses (Saturn) its last stronghold in Raqqa, once the de-facto capital of its so called caliphate. In the final battle (Mars) for a stadium complex and hospital, the US-backed Syrian Democratic Forces (SDF) says it killed 22 foreign IS fighters. Mars was square Saturn in the sky.

October 16: Daphne Caruana Galizia (Venus), a Maltese investigative journalist (Mercury) who exposed her island nation's links to offshore tax havens through the leaked Panama Papers is killed when a bomb (Mars) explodes in her car. Progressed Mercury was opposition birth chart Mars in the Aquarian Age chart; and Mars was opposition Venus in the Mars cycle.

At least 36 people die in wildfires (Mars) raging through parched farmlands and forests in Portugal. Mars was opposition Venus in the Mars cycle.

October 15: Alyssa Milano (Venus) tweets: If you’ve been sexually harassed or assaulted (Mars) write ‘me too’ as a reply to this tweet. Mars was opposition Venus in the Mars cycle.

North Korea (Sun) threatens Australia with disaster (Mars) if it continues to support the US stance on Pyongyang. Mars was sesquisquare the Sun in the Mars cycle.

The Board of Directors of the Academy of Motion Picture Arts and Sciences strips Harvey Weinstein of membership following a series of allegations of predatory sexual behavior.

The scandal broke on October 5 when the New York Times published undisclosed allegations against Weinstein. Since then it has engulfed Hollywood with many actors accusing Weinstein of sexual harassment or rape. 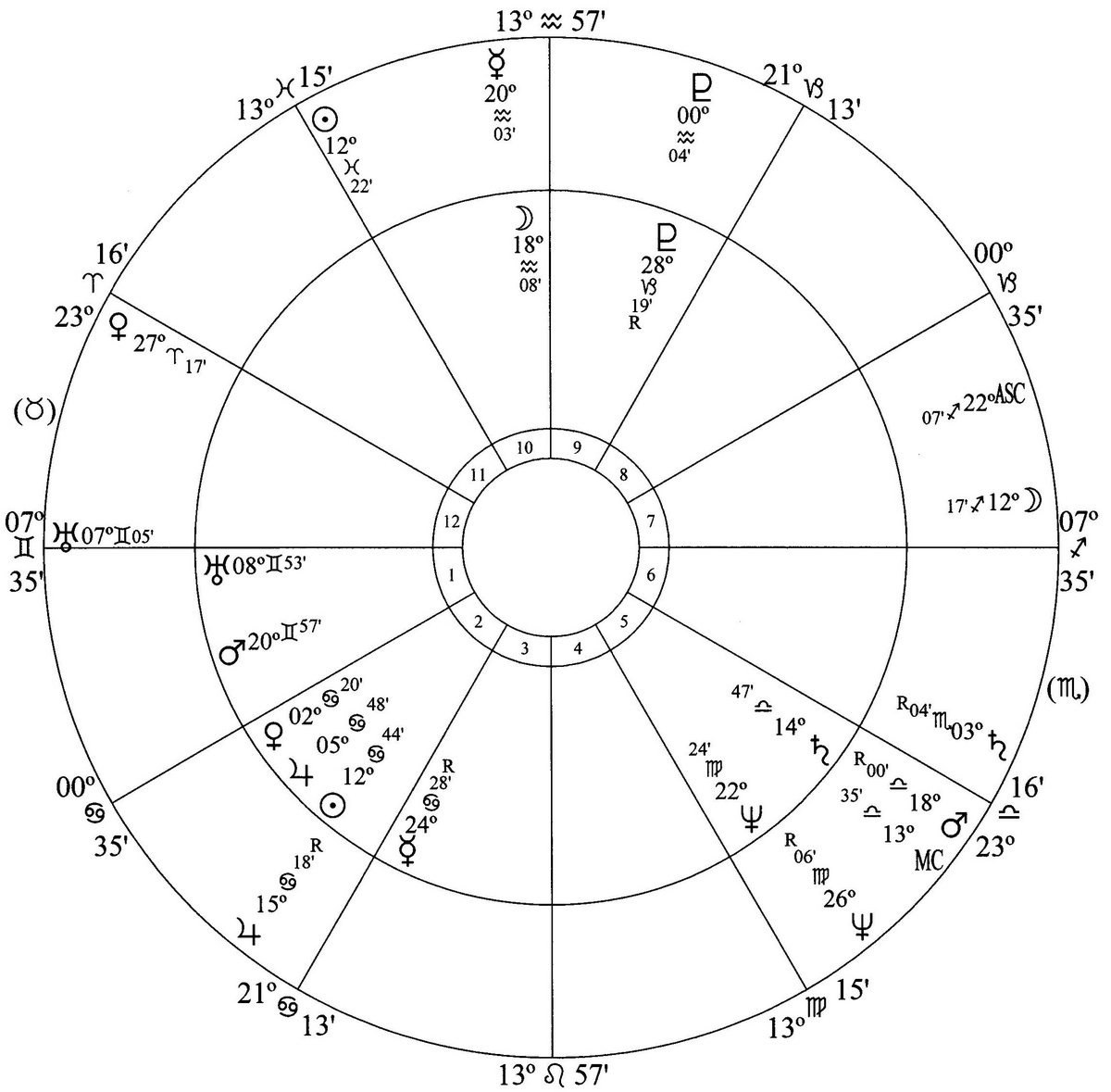 October 13: Donald Trump chooses not to certify that Iran is complying with the 2015 agreement and gives Congress (house 11) 60 days to reconsider sanctions (Saturn). Mars was square Saturn in the Mars cycle.

October 12: In Vietnam heavy rain causes flooding and landslides (Saturn) killing 54 people with many missing. More than 17,000 households have been evacuated. Mars was square Saturn in the sky and the Mars cycle.

October 10: US President Donald Trump declares the 17 Northern California wildfires (Mars) a major disaster (Mars). The fires have killed at least 15 people with more than 150 others missing and at least 2,000 homes and businesses destroyed. Mars was conjunction the Great American eclipse; and Mars was square Saturn in the sky.

Catalonia's leader Carles Puigdemont says his people have voted for independence (Uranus) from Spain — but that he wants a negotiated solution with Madrid. Sun was parallel Jupiter in the Sun cycle.

October 8: Hundreds of thousands of people take to the streets of Catalonia’s capital Barcelona to express their opposition to declaring independence (Uranus) from Spain, showing how divided (Pluto) the region is. A crowd estimated at 350,000 wave Spanish and Catalan flags and carry banners saying ‘Catalonia is Spain’ and ‘Together we are stronger’. Spain is facing its worst political (Sun) crisis for decades.

Progressed Mercury at 4 Cancer 35 in house 10 (the administration) is opposition birth chart Mars at 4 Capricorn 03 in house 4 (the country and its regions.)

Progressed Sun – the planet of politics – at 14 Gemini 59 in house 10 is sesquisquare (agitation) birthchart Sun in house 5.

October 5: The Iraqi Army (Mars) retakes the city of Hawija in the Kirkuk Governate from ISIL. Fighting continues to the north and east of the city as Iraqi troops continue anti-ISIL operations in the Hawija district. Mars was square Saturn in the sky.

October 4: Spain's Prime Minister and Catalonia's regional leader continue trading barbs as the north-eastern region says it could declare independence (Uranus) from as early as next week. Jupiter was opposition Uranus in the sky and inconjunct Uranus in the Jupiter cycle.

October 3: Tens of thousands of people take to the streets of Catalonia disrupting road traffic, public transport and business in protest (Uranus) against Sunday’s violent crackdown (Mars) by Spanish police (Mars) on an outlawed independence (Uranus) referendum. Jupiter was opposition Uranus in the sky and inconjunct Uranus in the Jupiter cycle.

October 1: A lone gunman slaughters (Mars) at least 59 concert goers in Las Vegas, with over 500 injured. The man-made tragedy was the largest mass shooting (Mars-Pluto) in US history. Mars was trine Pluto in the Mars cycle; and Mars was conjunction the Great American Eclipse.

Mars – the planet of guns, shootings and violence – in house 1 (the people) dominates the US birthchart.

The Gun Violence archive describes a mass shooting as 4 or more individuals being shot or killed in the same general time or location and there were 483 mass shootings in 2016 and 270 up to October 2, 2017, which means that mass shootings are a daily occurrence in American.

The government of Catalonia holds a public referendum (Uranus) on whether their region should gain independence (Uranus) from Spain, despite the Spanish courts (Jupiter) and government declaring the vote illegal (Pluto) and deploying police (Mars) to deter voters.

Over 800 people and 12 police officers (Mars) suffer injuries. The Catalan leader, Carles Puigdemont, claims victory saying the region has won the right to statehood. Jupiter was opposition Uranus in the sky; Jupiter was inconjunct Uranus in the Jupiter cycle; and Mars was trine Pluto in the Mars cycle.

More than 134,000 people on the island of Bali, Indonesia, have been taken to shelters as the Mount Agung volcano (Saturn) continues to release smoke. The alert level for an eruption (Mars) has been raised to level 4. The entire population of Vanuatu’s Aoba Island has been moved from the path of the Lombenben volcano. And Vanuatu begins evacuating 11,000 islanders from the island of Ambae because volcano Manaro Voui is erupting.

If an eruption occurs it will most likely occur around October 11 with Mars square Saturn in the sky.