It’s not uncommon these days for voters to have great expectations in their elected representatives and on May 14, 2017 when Emmanuel Macron was inaugurated leader of the world’s fifth-largest economy the expectations were greater than great.

He vowed to restore the country’s standing on the world stage, strengthen national confidence and heal social divisions; but Macron, the investment banker, is a political neophyte and it wasn’t long before the voter’s great expectations (Neptune) had a reality check (Saturn).

Then he got into strife (Mars) when he announced plans to give his wife, Brigitte, (house 7) an official ‘first lady’ role.

Within months Macron’s popularity had plummeted 20 points (discordant MC and house 10) with only 36% of French people saying they were happy with their new leader.

Respondents told pollsters they admired Macron’s determination to push ahead with his reform agenda and make good on his campaign pledges, but they couldn’t shake off the feeling that his policies favor the wealthy (Jupiter) over the middle class and poor (Saturn).

By November 2017 his popularity had rebounded with 46% of voters saying they were satisfied with his performance. 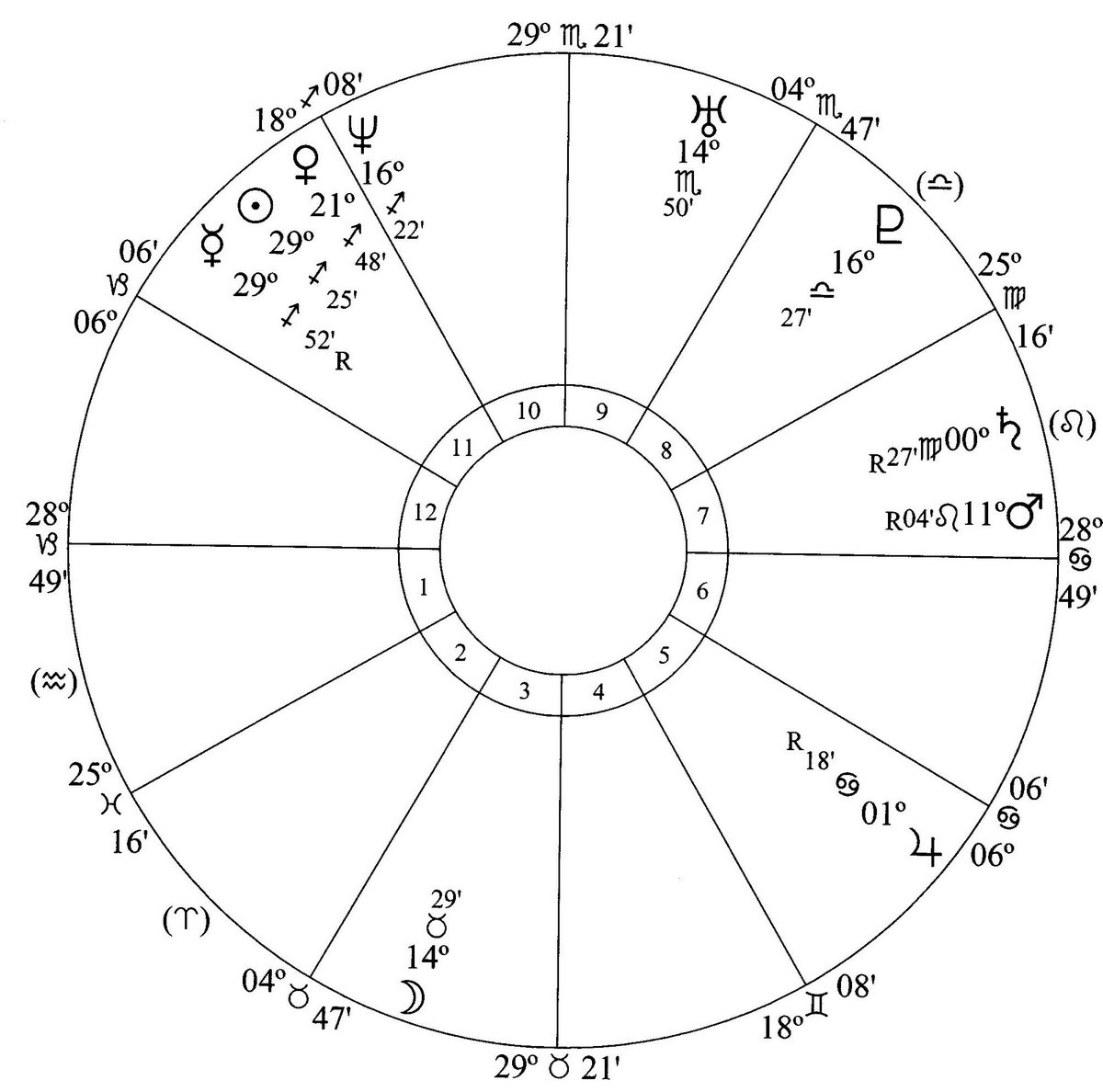 Its psychological correlate is the power urge and the ultimate power is political power. It controls other people’s lives and a country’s destiny.

He also has an overwhelming sense of self-importance and considers himself pre-eminent, noteworthy and deserving of praise, admiration and respect.

His personal and political success is directly linked to the advice and influence of very powerful and influential friends (Sun in house 11).

The Sun is conjunction Mercury – planet of intelligence, intellectual ability, objective thinking, talking and controversy – and the Sun and Mercury are opposition Jupiter – planet of goodwill, faith, optimism, patronage and wealth.

This aspect set-up signs for conceit, vanity, self-indulgence, extravagance and an over-the-top opinion of himself and what he can do and achieve.

But the tendency to engage in these misguided, ineffective behaviors is somewhat appeased by Saturn – the planet of work, responsibility, persistence and economy – in house 7.

Saturn is in house 7 and its practical and cautious approach towards partners and the public (house 7) mitigates the potential for mishap and discord mapped by the Sun-Jupiter and Mercury-Jupiter opposition aspects.

It’s reported that Macron once said he wanted to be a ‘Jupiterian leader, unchallenged and detached from trivialities, like the Roman god of the skies.’ But it seems that the mundane challenges (Saturn) of governing (Sun) and a series of public relations missteps (Sun discord) dragged him down to Earth (Saturn) very quickly. 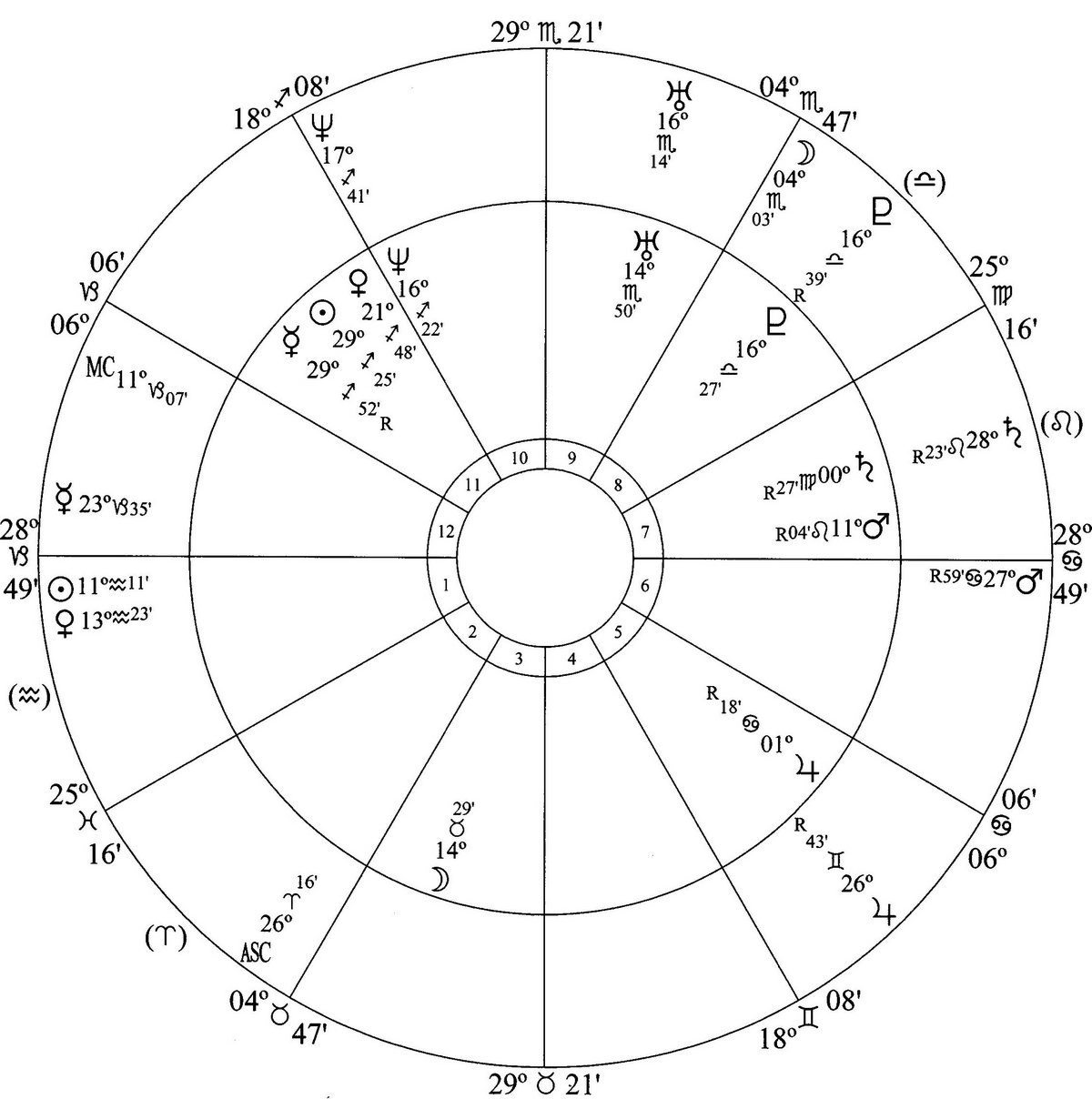 Progressed aspects involving the Sun are very important and their influence is greatly enhanced if the Sun has above average power and is classified as prominent.

They influence the capacity to exercise authority and control – especially the relations with men in general – and affect the significance and sense of self-importance.

On the health front they influence the vitality – the vital energy that sources vim, vigor, endurance and recuperative power.

And the Sun is the dominant planet in Emmanuel Macron’s birth chart.

Mars is the planet of strife, haste and energetic effort.

Its psychological correlate is the aggressive urge and achievement of any kind requires energized effort, initiative and the willingness to confront and overcome opponents and obstacles.

The functionality of Mars is a crucial factor. It’s measured by its harmodyne or discordyne score.

A Mars progression gives a boost to the normal level of aggression so disputes and conflicts easily erupt. There’s a strong feeling of urgency and an increased tendency to take risks and act recklessly. Speed can contribute to accidents and injuries and operations can occur.

The level of risk and danger indicated by the aspect needs to be evaluated carefully and precautionary measures taken to reduce the chance of mishap and misadventure.

In Macron’s chart Mars has above average power, is square the Moon and Uranus and high in discord.

On November 19, 2017 progressed Sun in house 1 of his chart (his health, welfare and personality) moved to form a high-discord separation (opposition) aspect with birth chart Mars in house 7 (partners, the public, opponents, open enemies, competitors and law suits.)

Birthchart Sun is in house 11 (his friends and allies) and is a co-ruler (Leo intercepted) of house 7.

And Mars is the co-ruler (Aries is intercepted) of house 2 (his finances) and the cusp ruler (Scorpio) of house 10 (his honor, reputation and publicity).

The aspect’s discord, expressing as unrelenting mental conflict, involves a decision that he will have to make where the choosing of one very desirable thing will result in the losing of the other.

It will tear his life apart.

2018 will be a year of conflict and torment

The opposition aspect signs for adversity, struggle and separation; and with progressed Sun in house 1 and birth chart Mars in house 7 the focus is on him and his personal welfare and his relations with partners, open enemies and the public.

Birthchart Sun is in house 11 (powerful political friends and allies) and progressed Mars is in house 6 (work problems and sickness).

The aspect forecasts power abuse, abuse of authority, the undermining of his authority, a leadership crisis, a power struggle, allegations of arrogance, attacks on his self-esteem, a crisis of confidence, a political scandal, disputes with partners and/or world leaders, aggressive moves by opponents, danger, hostility, marital strife, law suits, great distress, separation and an accident, injury or operation.

The aspect undermines his capacity to control his environment and the risks involved demand vigilance and measures of self-protection.

The separation event may be personal or political and Macron could be fighting for his political life against very aggressive and hostile opponents.

This aspect activates the Sun-Jupiter opposition aspect in his birth chart.

Jupiter is the marker for wealth and prosperity. Its psychological correlate is the religious urge and religious teachings provide ethical values and good behavior guidelines that act as a moral compass.

Jupiter’s influence is essentially benefic and fortunate but its discordant expression does result in mishap and misfortune.

Some life-matter ruled by house 5 (a love affair, speculation, a child or sport) can play an important role in the separation event as it unfolds.

Major progressed Moon in house 8 is trine progressed Jupiter in house 5 on June 15, 2018; square progressed Mars in house 6 on July 23, 2018; and sextile birth chart Sun in house 11 on August 27, 2018 and major events involving his political career, health, marriage, partnership and open enmity can occur during June, July and August 2018.

The Mars discord peaks from June 26 to August 18, 2018 and signifies a need for increased security to ensure his personal safety.

Experience is the teacher

The astrology code pictured in Macron’s birth chart defines a special kind of intelligence and ability that’s developed through experience.

The planets by their houses positions specify the life-matters, activities and people directly involved in the enterprise.

The opposition aspect is high in discord and separation events are particularly stressful and difficult, but like all experiences they have valuable lessons to teach.

The discord markers in God’s great astrology code all play a crucial role in the development of intelligence and ability.

The difficult and painful experiences they code for are the means by which courage, fortitude, persistence, initiative, resilience, intelligence, firmness and creative power are developed and built into the character.