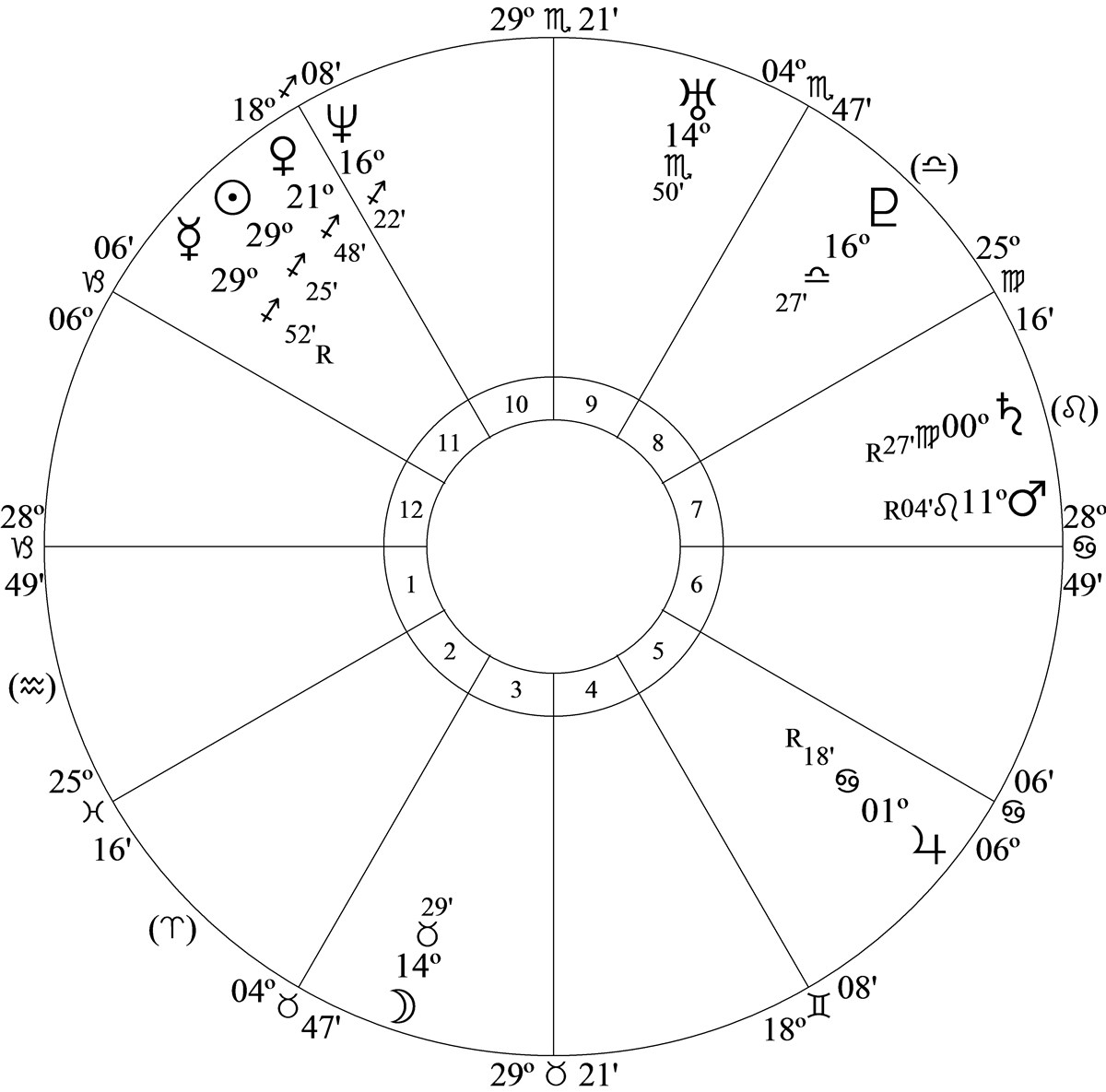 His birth time has a ± 2 minute margin of error and there are no structural changes in the chart within this timeframe.

The Sun in house 11 (friends) dominates Macron’s birth chart. It’s the planet of politics and he has an overwhelming sense of self-importance and considers himself deserving of praise, admiration and respect.

Sagitta – the decanate of illumination – dominates his chart and his capacity to synthesize his observations and perceive things in their correct perspective is his outstanding ability.

He’s had to transmute his tendency to game play and live the sporting life (Sun is opposition Jupiter in house 5) into more worthwhile and useful endeavors; and he’ll reach his greatest social usefulness as a leader or exponent of philosophical or religious principles. He has to be faithful to his own conceptions and lofty ideals and has the potential to attain Divine Consciousness.

His best qualities are loyalty and kindness.

Sun and Mercury are opposition (separation) Jupiter – planet of religion, goodwill, optimism, patronage and wealth. The discord inclines towards conceit, self-indulgence, extravagance and an over-the-top opinion and what he can do and achieve. But the discord potential is somewhat appeased by Saturn – planet of work, responsibility, persistence and economy – in house 7 (his wife and other partners).

Saturn is trine Sun and Mercury and sextile Jupiter and by conciliating the Sun-Mercury-Jupiter conflict acts as peace maker. So while he stays focused on working hard, security issues, developing system and eliminating waste and inefficiency he mitigates his potential for indiscretion and reaches a greater level of social usefulness.

His personal and political success is directly linked to the advice and influence of very powerful and influential friends (Sun in house 11).

Moon (his mind) is in the second decanate of Taurus.

Orion – the decanate of struggle – indicates a dilemma and Macron is mentally conflicted and struggles with physical and material limitations imposed by his personal circumstances. The struggle involves social pressures, career options and his desire for fame, social status and financial supremacy (dominant Sun opposition Jupiter). And winning the struggle hinges on his powers of analysis and discrimination to overcome obstacles.

Ascendant (his personality) is in the third decanate of Capricorn.

Pisces Australis – the decanate of idealism – bestows a capacity to contact and be influenced by unseen astral intelligences and a talent for turning the ideal into concrete reality. Macron has executive (Sun) and planning (Saturn) ability and reached his highest potential as President of France where his positional power allows him to develop and execute his own plans.

When meeting people his personal best qualities are diplomacy and idealism. It’s reported that Macron once said he wanted to be a ‘Jupiterian leader, unchallenged and detached from trivialities, like the Roman god of the skies.’ But the Moon in his birth chart had other ideas.

Emmanuel Jean-Michel Frédéric Macron is the son of Françoise Macron, a physician and Jean-Michel Macron, professor of neurology at the University of Picardy. He was raised in a non-religious family, but was baptized a Catholic by his own request at age 12. He’s now an agnostic.

Macron was mainly educated at the Jesuit institute Lycée la Providence in Amiens; and then at the elite Lycee Henri-IV in Paris, where he completed the high school curriculum. (He received his diploma for piano studies at Amiens Conservatory.) In Paris he studied philosophy at the University of Paris-Ouest Nanterre La Défense obtaining a master level degree; and obtained a master’s degree in public affairs at the Sciences Po. He trained for a senior civil service career at the selective École national d-administration training at an embassy in Nigeria and an office in Oise before graduating in 2004.

In 2010 he joined the staff of Francois Holland and on 15 May 2012 became the deputy secretary general of the Élysée. On August 26, 2014 he was appointed Minister of Economy and Industry; and in August 2015 said he was no longer a member of the Socialist Party and was an independent.

Macron is largely seen as a centrist or a social liberal or a social democrat. He married Brigitte Trogneux in 2007 and is a football fan supporting Olympique de Marseille.

On May 7, 2017 with 66.1% of the second round vote in the French Presidential election he defeated Marine Le Pen and at the age of 39 became France’s youngest president. Since then he’s had to lead his country through the yellow vests anti-fuel tax protests and the covid-19 pandemic. In 2022 he played a leading role in seeking a diplomatic solution to the Ukraine-Russia crisis.

Biographical data is from his Wikipedia entry.