The source notes on Astro-Databank state ‘the document was evidently posted (online) by Trump, (so) some caution is advised even though there is no evidence that the document was altered.'

This raises the question of why would he alter the document?

Trump knows nothing about astrology or the importance of the birth time and place in a chart’s construction.

So it’s safe to say that the data as per his birth certificate is authentic.

From Trump’s perspective it confirms that he was born in the USA. 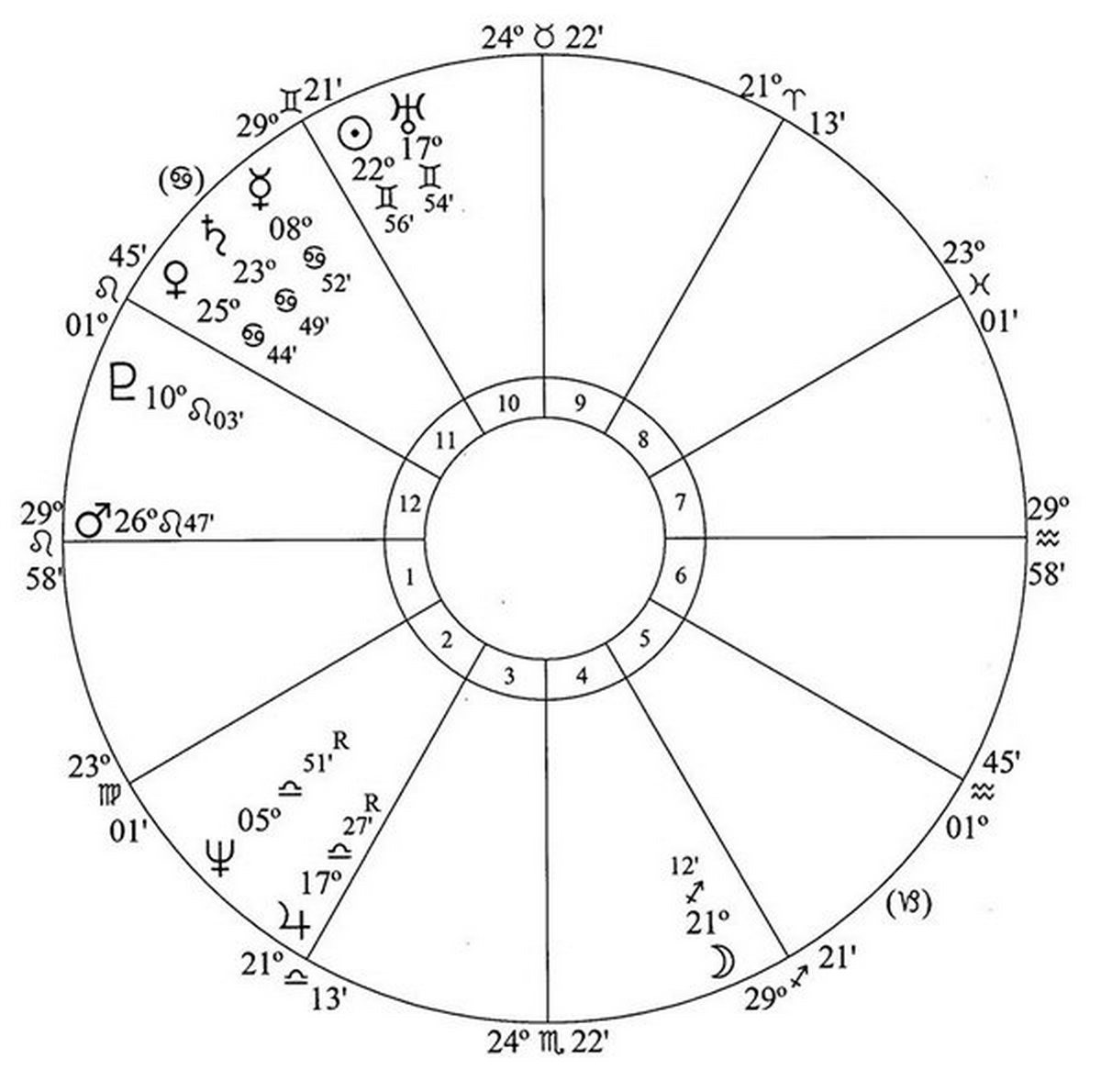 It reveals that Trump’s dominant driver is his urge for power, control, influence and authority and that the business/public arena (house 10) is the environmental setting that ignites his desire for power, significance and respect (Sun).

The strength of the Sun in relation to the other planets reveals a mighty big ego and a sense of self-importance that easily spirals out of control in his quest for prestige, social status and personal glory.

Trump has an insatiable need for public notice and adulation.

Planets with above average power

#2. The Sun, Moon, Uranus and Venus have above average power.

Each of these planets marks for a thought-cell group in his not-conscious mind that has the psychokinetic power to attract events and conditions that influence the direction his life takes.

The Moon in house 4 (his father, home, real-estate interests and latter life) is the planet of feelings, family and fluctuation.

Uranus in house 10 (business, honor and reputation) is the planet of individuality, original thinking, extreme views and sudden, unexpected changes.

And Venus, in house 11 (friends), is the planet of affection, social connections and gratuities.

#3. The Sun in the third decanate of Gemini – reason – is conjunction Uranus in the second decanate – fidelity.

The third decanate of Gemini is all about the power of thought.

Trump’s objective thinking can accomplish great things, but he's very self-centred. (With a little help he has written 3 autobiographies.)

The second decanate of Gemini marks for a single, admirable faithfulness (which he seems to have in his children).

#4. The Sun is opposition Moon in the third decanate of Sagittarius – illumination.

This high-discord birth chart aspect marks for a state of consciousness that’s been built by painful separation experiences involving his sense of self-worth (Sun), reputation, family-life, the everyday people and women in general (Moon).

The thoughts and feelings embedded in this thought-complex are naturally inclined to attract painful separation events.

The third decanate of Sagittarius is all about teaching, imparting knowledge and religious thought.

It signs for illumination and the synthesis of observations into proper perspective.

Spiritual supremacy is attainable, but only when the base animalistic proclivities are transmuted into noble endeavor.

#5. Mars in house 12 (secrets) is conjunction the ascendant in the third decanate of Leo – ambition.

At 10.54.10am the ascendant moved to Virgo but observation reveals that he has a domineering, attention seeking Leo personality.

It’s assumed that the recorded time will be within one minute of the actual birth moment – some time between 10. 53am and 10.55am.

Trump is harsh, insensitive, vulgar and impulsive, but with Mars in house 12 he keeps these traits hidden away from public view.

The third decanate is all about power, rulership and self-aggrandizement.

Trump has a natural gift for handling others and using them to advantage, but his insatiable desire for more and more power can see him sacrifice his friends and integrity to get it.

Mars and Jupiter are harmonious conciliators

#6. Mars in house 12 (his secret life and disappointments) and Jupiter in house 2 (his personal finances and possessions) conciliate the Sun-Moon opposition.

As a separation thought-complex it works to attract painful separation events involving his business interests and reputation (house 10) and his real-estate interests and home-life (house 4) and the discord adversely affects his self esteem (Sun) and mind (Moon).

He just has to keep his attention focused on making money (house 2) and working behind the scenes (house 12) and avoiding the environments ruled by house 10 and house 4.

Trump boasts a net worth of $10 billion and it’s all because of the harmony embedded in the not-conscious thought-complexes mapped by the Sun-Jupiter trine (luck) aspect and the Moon-Jupiter sextile (opportunity) aspect.

Money exhilarates him and these thought-complexes attract lucky breaks and opportunities that allow him to make it.

But with Neptune – the planet of deceit – in house 2 his net worth boast will be a wild exaggeration.

Mars, the planet of impulsive risk taking, is square (obstacle) the Midheaven (his reputation) so his aggressive behavior has hindered his business success and caused him business problems and reputational damage.

Mars is cusp ruler (Aries) of house 9 – television – and Trump has hosted his own television show and is described as a television (Pluto) personality but this seems to have been a side-show rather than a main career choice.

Jupiter in house 2 is cusp ruler (Sagittarius) of house 5 – speculation, risk-taking and his children – so when it comes to making money his children are a supportive environmental influence.

But Saturn's in house 11 so his friends and associates aren't. His friends have caused him big losses.

#8. Mercury and Neptune are the weakest planets in the chart.

Mercury is the planet of intelligence, verbal expression, reasoning powers and evidence-based knowledge and Trump was the last person on the planet to know that Barack Obama was born in the USA.

Neptune is the planet of imagination and schemes so he’s not crash hot at imagining and scheming.

His thinking cap (Mercury) is playing single fiddle to his feelings and hunches (Moon) and intuitions (Uranus).

With Mercury square Neptune Trump can fake his intelligence and is inclined to hyperbolize, vaguely meander and exaggerate.

It's the Moon and Uranus thought-cells doing all the mental work and there's little thoughtful reasoning (Mercury) going on.

The character mapped by his astrology code operates in an environmental setting mapped by the houses in his chart and Donald Trump’s dominant character trait – his desire for power, control, significance, attention and respect – has been built by, and develops in response to, events and conditions involving credit, honor, business, profession, superiors and mother.

His mother, Mary Anne MacLeod Trump, was a powerful force in his life. She had big ambitions for her son.

Trump’s life has been shaped by events and conditions that represent his character in action.

The life-matters, activities and people mapped by the houses in his birthchart with above average power are the ones that have played the lead role in his life-story.

House 11 marks for friends and associates and much of what Trump has achieved is due to their influence.

You could say that he is a friend made man, but the story his friends tell isn’t all bells and whistles.

With Mercury in house 11 square (obstacle) Neptune and Venus conjunction Saturn in house 11 his friends have given him bad advice and caused him big losses.

Mars there is the planet of sex, guns and alcohol.

Philanthropy is a house 12 life-matter and Trump is described as one of the least charitable billionaires in the world.

He’s got a conflict of interest (Mars) in regard to his charity (house 12).

The life-matters, activities and social relationships ruled by house 4 include his home-life, father and real-estate and with the Moon there he was easily impressed by these environmental cues during his formative years.

They represent a very important chapter in his life story.

Trump followed in his father’s footsteps and went into real-estate.

On November 8, 2016 he was elected president of the United States of America but the states are far from united – the nation is irreconcilably divided.

Considered an outside chance he grabbed the support of politically discontented voters and unexpectedly (Uranus) won the White House.

And he hasn’t stopped applauding his achievement.

He loves the power, influence, limelight and attention but how the man who’s described as a television personality, businessman, property tycoon and demigod governs a very divided American nation and deals with the very cunning and very competitive international political environment is an unfolding story.