On December 14, 2020 the Moon will pass between the Earth and Sun and at around 1.00pm local time parts of Chile and Argentina will plunge into total darkness for just over 2 minutes. . 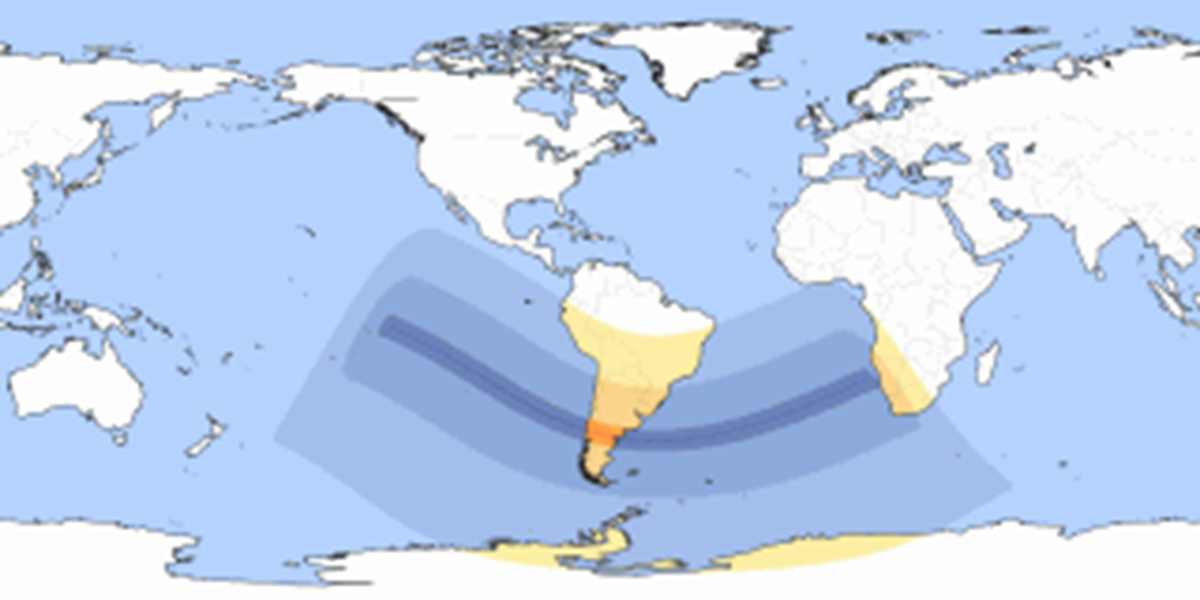 In 2020 the theory of eclipses, based on a small amount of scientific research, is vague and imprecise. It proposes that within a few months, before or after an eclipse, a disaster will afflict a populated region that experiences the blacking out of the Sun.

And with so much going on within the eclipse forecast period identifying events pertaining to the eclipse could be tricky.

The eclipse reaches Chile at 1.01pm CLST and Santiago is almost blacked out by a partial solar eclipse at 1.00.07pm CLST.

No planet in house 4 of the eclipse-new Moon chart may reduce the potential for a natural disaster. Whatever... the eclipse event will have national significance so it may only get scant coverage by the international media.

In July 2020 the coronavirus crisis and simmering discontent over inequality and a neoliberal economic model brought Chile to the brink of a major political crisis. The country has weathered the covid-19 economic recession better than most Latin American countries. As at October 19, 2020 its covid-19 case count was 493,000 and its death toll was 13,600.

In October 2019 civil protests erupted across Chile in response to a raise in Santiago’s subway fare and general increased costs of living. The pandemic brought the protests and street rallies to an end.

A national referendum will be held on October 25, 2020. Chileans will vote on two questions: do you want a new constitution and what type of convention should draft the new constitution.

Chile is threatened by volcanic eruptions, earthquakes, tsunamis (due to its extensive coastline), floods, avalanches, and forest and urban fires.

All the major cities in Argentina will experience a partial solar eclipse.

Knowledge of the current situation in Argentina and the countries climatic-weather conditions provides data necessary for reliable eclipse prediction.

No planet in house 4 of the eclipse-new Moon chart may reduce the potential for a natural disaster. And as the eclipse event only has national importance it may not get international media coverage.

Many northern provinces suffer from seasonal flooding. Flash floods can occur during heavy rains in other areas, such as the province of Buenos Aires. This can lead to disruption to transport and delivery of foodstuffs. The Copahue Volcano on the Argentina/Chile border erupts every so often.

Eclipse event (with Jupiter conjunction Saturn and Pluto in the sky)

December 30, 2020: Argentina legalizes abortion (Jupiter) by a Senate vote of 38 to 29, with one abstention. It’s a first for a big country in Latin America and a triumph for women’s rights campaigners over the visceral objection of the Catholic Church (Jupiter).

If you happen to be involved in a disaster event attributed to the eclipse your personal experience will be defined and timed by the progressed aspects operating in your chart at the time.